I keep searching for this list of apps that I post around.  It’s the stuff I use all the time on my LG Quantum and pretty much consider killer.

I’m also looking at Radio Controlled and MetroRadio even though Pandora STILL doesn’t work right on the pc.

I recently had an issue with WMP where my shared libraries wouldn’t show up on other devices.  Specifically this is WMP12, sharing libraries over UPnP.

I tried all sorts of troubleshooting – even built a UPnP monitor so I could see what was being advertised – they all were (note that WMP won’t show its own shared libraries on the computer that’s sharing them under other libraries).  I noticed a pattern.  The Tablet PC library would show up on both the Laptop PC and the Media PC, and the Tablet PC would see EITHER the Media PC or Laptop PC libraries, but never both.

I tried reconfiguring the home group, rebuilding the libraries, and all that.  I even re-sysprepped the Laptop PC and Media PC.  None of it helped.  I dug in the registry and found something… Turns out it was my export/imported profile causing the issue.

The list of UPnP media servers is in the registry, under "HKEY_LOCAL_MACHINE\SOFTWARE\Microsoft\Windows Media Player NSS\3.0\Servers".  Turns out that the Laptop PC and Media PC had the same serial number, and that serial number is supposed to be unique per the spec.  So I closed WMP, stopped the related services (UPnP Device Host and Windows Media Player Network Sharing Service), deleted the subkeys, and started it all up again.  And they came right back.

More digging found that those keys are related to "HKEY_LOCAL_MACHINE\SOFTWARE\Microsoft\UPnP Device Host\Description".  The next leap took a few minutes.  It looks like when you set up sharing, WMP registers its library with the WMP NSS service, which stores the reference under "HKEY_LOCAL_MACHINE\SOFTWARE\Microsoft\Windows Media Player NSS\3.0\Server Settings".  WMP gets that data from its local settings cache in "HKEY_CURRENT_USER\Software\Microsoft\MediaPlayer\Preferences\HME".  And it pulls data into that from any library it finds.

Those last two bits (the registry keys and library data) are reinforcing.  WMP will rebuild the settings for one from the other.  The solution was to wipe all the WMP settings and the library, then run WMP again.  It will build a new library with entirely new settings (including a new GUID for the media server serial number).

First use an elevated account to stop the related services:

Then wipe the duplicated data from the user account with the affected libraries:

And start Windows Media Player at your convenience.  It will go through the configuration dialog again, rebuild the library, and it should present a new serial number for the media server UPnP device.

I was going to get the VIZIO E322VL, but held off and did some more research.  Apparently it has no DLNA support.  I couldn’t find a single Vizio TV that does.  Gonna have to pass on this one.  This ain’t the year 2000 – electronics need to work together without brand lock-in. 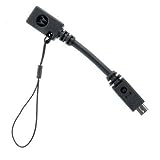 Has a USB Mini-B female socket on one end, and a USB Micro-B male plug on the other.  Plus a little tether so you can connect it to a cable.  With my mix of devices that have mini (battery charger, camera) and micro sockets (phone, nook), I’d have to carry around twice the number of cables.  Now I carry two cables, each with one of these adapters on it.  I also keep one on the car charger.

I saw this on the shelf at Target one day and thought it might be a good contender for a travel battery charger.  I’d been using some crappy ones, and couldn’t find an all in one device.  Basically, I wanted something that would store two or four AA batteries, provide 5 VCD out, optionally have a flashlight, and preferably charge them from a 5 VCD standard USB port.

This one does all of the above.  And does it well.

The construction is rock solid.  The door doesn’t come open without some effort, and the body is sturdy.  After a month of heavy travel,mine has some scratches, but no cracks or damage.

It stores four AA batteries, and has a removable tray that lets it hold AAA batteries instead.  One gripe is that the tray comes out – I’d prefer they have some sort of flip-down spacer that changes the fit.  If it can be removed, it will get lost. I’ve standardized on AA batteries, so that’s not a huge deal for me, but it’s still annoying.

The front face has a switch, a status indicator, a bright white LED light, a USB A Female port, what appears to be an EIAJ-01 coaxial power plug, and a USB Mini-B Female port.

It’s a trickle charger, made to work on 2.5 watts input.  It will take several hours to charge batteries.  That’s inherent to working with low power levels like this.  If you want something faster, get a high current quick charger.  The auto-off works fine, so you can leave it connected to a charging source.

Oh and it has a neat hook on the back… I have no idea what that’s for.

This meets my criteria for a travel device: compact, uses standard batteries, accepts standard power in, provides standard power out.  It’s not fancy, not expensive, and does its thing reliably.  If you need power or recharging in a portable platform, this might just be the best option out there.

You know, normally I’m something of an evangelist for microsoft stuff.  But they really screwed up their live mail recently.  From reading their support forum, they flagged thousands of established accounts as spammers, and are doing their best to ignore reports of it.  This is the second major Live problem that’s come up in the past week.  I’m seriously considering jumping ship.

It’s been too long since the last substantial update, and they’re still missing some important bug fixes and necessary additions.

Bug fixes:
WLS loses my saved sign in information when it encounters any connectivity issue.

Necessary features:
Eliminate the 20k file limit: I had more than 20k pictures when you first increased the limit.  Get it started at near 100k, work up from there.
Programmatic folder addition: I have to manually set up every folder every time I reimage a computer.  BS.  There needs to be a way to do this with at least a registry edit, if not a command line option.
Common folder sync options: in the options dialog, there should be a tab with check boxes for “pictures”, “music”, “favorites”, “documents” etc.  Check the box, it syncs that folder in your profile with the corresponding folder on skydrive (or at least with every other WLS client).
Skydrive sync support: I know it’s coming, but I want to stop hearing excuses or a total lack of communication.  Just get it done.

Yep.  I need a camera that’s reasonably shockproof and water resistant, and will occasionally go under water for cool pictures.  I’ve looked at a couple now, and camera manufacturers just don’t seem to get a few points.

First I reviewed the Vivitar V8400.  It’s pure crap.  It just plain feels light and cheap, the buttons are loose but don’t take presses half the time, and the image quality isn’t significantly better than my cameraphone.  Plus it uses a proprietary connection for the USB cable, a major no-no.

I’ve looked at a few olympus models, and they seem to have better quality, but have even more proprietary features that exclude them.

Thus the search continues.  I just want a camera that can get wet and doesn’t have flashy custom features.  It shouldn’t be hard.  If someone made one that met a few basic requirements, I’d buy it immediately:
Waterproof or very water resistant
Takes standard AA batteries
Takes a standard mini USB plug
Takes standard CF, SD, or micro-SD memory cards

I’m not buying your cheap lock-in crap from china.  If my old HP photosmart M417 were waterproof (and not broken), it would be a clear win.

I’ve caught some hype about new versions of the windows mobile apps coming out this week, so I decided to check it out.  I was completely underwhelmed.

The servers are dead slow, they’re full of popups, and it basically boils down to two pages that say “download now!” that direct to each other.  There’s no actual download.

Don’t believe the hype, this one is a fail.

Oh yeah – I actually paid for a throwaway phone number to feed into the web site (really, what kind of idiot puts their personal cell number in random web sites?) … and the sms never came.